A couple of years ago, around 2010 I think it was, my friends Ann and Jim Shankman contacted my mom (Jeanne Hayes) and me to see if we had programs that covered the Chappaqua Drama Group’s past productions. My mom had started working with the group in 1964 and I started working with the group in 1984. To the best of my recollection Ann & Jim were working with what was left of CDG’s assets after the sale of the building and the property it was situated on and working with some other folks (names I don’t recall and not sure I recognized in the first place) to try and revive CDG in some form in some kind of a partnership with Little Village Playhouse and Arc Stages in Pleasantville NY. 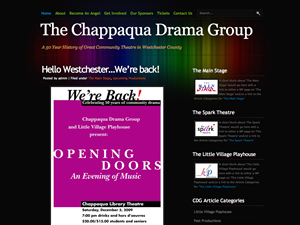 I scanned the covers and title pages from the majority of programs in the Hayes family joint possession and then put them together in a WordPress website built on a child theme based on the WordPress theme Colourise. In fact I built the site in both a white and black version and gave them access to the code and all the scans and advised them to use social media which at that time was pretty much FaceBook to promote and publicize what they were doing and build a following. I don’t really know what happened next. I guess they went on with their fundraiser event “Opening Doors, An Evening of Music” but that was the last I ever heard from them and I eventually learned what was left of the groups assets had been taken over by the Little Village Playhouse and Arc Stages.

Well I eventually took the demonstration website down from my server but I still had all these scans of program covers (although I am still missing some) and in the past couple of years with the passing of some of the old Chappaqua Drama Group icons I thought about republishing the website since the registration for the Chappaqua Drama Group domain had lapsed and I could now pick it up. But 2010 was WordPress 3.x and WordPress today is on version WordPress 5.x and how we design and build websites has dramatically changed with the advent of page builder tools like Elegant Themes Divi which is what I have used here.

In addition to consulting and coaching building and remodeling contractors on Lean Project Management and Estimating, designing and marketing my own software, I also work with clients on their digital marketing strategies and build websites and thought this website would be a fun excercise and like the good old Drama Group Building was for me years ago a good workshop and workspace to try out some things.

If you have photos or news paper reviews or some old stories you would like to share let me know and I’ll build photo galleries for the shows and publish your material.

You can contact me directly via my contact informating at the top of every page or talk with me and other CDG Alumni in the FaceBook Group I created for that purpose…Chappaqua Drama Group Alumni.